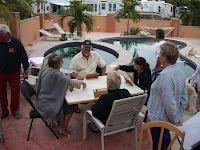 What a fun, fun day we had today. 16 of us from the campsite played a Rummy-kub tournament this afternoon around the poolside. (OK - so wait - I can see how 3 hours of board games possibly doesn't sound that 'out there and happenning for such hip and trendy travellers such as ourselves....but trust me...ok, maybe you just had to be there!) 3 hours of 'intense!!' playing later and Chris came out the champion winning $80!! (so now - you see it was a good afternoon for US!!) So we let him take us all out for beers at the local taco stand. Great fun, great company and finished off the evening with great tacos and ice-cream! and then a ride home for me on the back of an ATV driven by a deaf old 80-year old - you gotta love it!!
No comments:

Just a lazy old week in Los Barriles for us!

Had a bit of a setback last weekend. Chris went out for a ride on the bike and the drive belt snapped. Thankfully he was only 1.5 km from home, and some guy helped tow him back to the campsite. However it all screwed up our plans to move on a bit. Although there's a Harley shop in Cabo 50 miles away they reckoned on not being able to get a belt for a month!! (have they not heard of Fedex?!) Anyway. 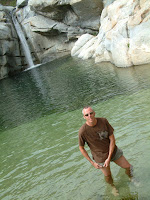 A neighbour here at the campsite has a friend from Colorado flying down this weekend and he has been able to pick up a belt there and is bringing it with him. It's all worked out OK we hope and staying an extra week hasn't really been all that tough! On the up side this is the first bad weather we've seen since getting to Mexico so it's not like we'd have been using the bike much! 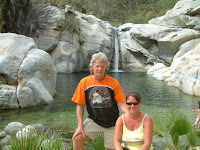 Yesterday we had a let-up in the weather just long enough to have a great day out! We hopped in the truck with our neightbours Collette and Ken from BC and drove out to Sierra La Laguna (the nearby mountains). We took a short hike out to a beautiful l 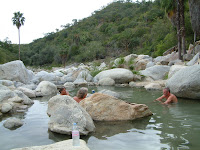 ittle waterfall on some national protected lands - it was small, maybe only 25ft high but it flowed into a crystal clear pool surrounded by smoothed rocks - took some rock scrambling to get down to the water but worth it! Had a great lunch in the local village - Santiago, before headed back into the mountains and down the most unlikely track to find some natural hot springs. Absolute bliss, the water temp was perfect and we whiled away an hour or so soaking and drinking beer in the late afternoon, finally getting back to the campsite at dusk - Such a great day out!
No comments:

It rains in Baja!! 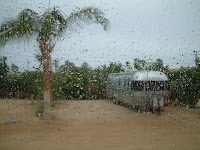 Nothing nicer than hearing the rain on the roof when you're still cosy in bed! This is easy for me to say. After 6 weeks in Baja we haven't seen rain till now.

I think it was a different story this time last year....
No comments:

Well this is the windsurf capital of BCS apparently and right now it's high season (just to give you a little idea of the wind here!) This was our first cloudy day too - but that's about all we can complain about - so really...no complaints!!

So we're staying in a great RV resort - and it is somewhere you'd actually call a 'resort'. Walking distance from the town, wifi, pool & hot tub - luxury! 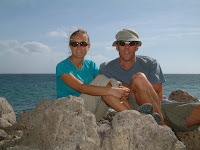 Spent the last couple of days in a place called Cabo Pulmo. One of only 3 coastal reefs in North America and accessible to snorkel from the shore....however it was too windy, too churned up - I'm sure we're not destined to snorkel on this continent ( 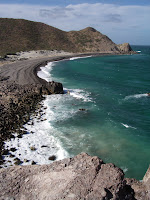 same thing happenned in the Florida Keys in January 2005). To get to the village it was 6 miles along a dusty wash-boarded track - it took us 1 hour and 2 minutes to drive along it!! and even then everything rattles like crazy - perhaps we should've bought the plastic tableware after all!!

About 1/4 mile north of our Cabo Pulmo campsite was the Tropic of Cancer - so we are IN the tropics - sounds far more exotic than it is!! This is us ON the line (we used the GPS to find a precise location, then fumbled around on the rocks finding a suitable place for the camera!)
No comments:

We met our second pair of bent cops yesterday out on their ‘gringo’ hunt; we were on the bike and coming back from a day out when, coming through the outskirts of La Paz we were pulled over. The two policemen were dealing with a local guy and just as the stories go; they saw the ‘flash’ looking motorcycle obviously ridden by wealthy gringos, sent the local on his way and pulled us over. You could actually see the $$$ signs in their eyes!
Apparently I’d jumped a red light. Not a chance amigo; Mexico is not a place to dice with traffic, especially on a bike; in fact I’m the only one in this city that ever stops at stop signs – so much so, I’m more worried about getting rear ended! (The lights actually changed to amber as we went through!)
This time there was no humble pie as we both argued adamantly with the English speaking officer and his ‘Spanish only’ boss. They insisted we had to pay $100 fine to get my licence back which I refused and asked the guy how I go about challenging the fine in court. I took my licence back from his clipboard, (which didn’t please him!) and asked him to take us to the police station while Helen made a big show of writing down all the details; time, place, policeman’s rank and number, their licence plate etc.
In the end, just like the time in Tecate, the ‘boss man’ decided to let us off with a warning! Grinning like the Cheshire Cat as I pulled my helmet back on I couldn’t help thinking if they weren’t so greedy they would probably get away with a lot more of their scams!
1 comment: 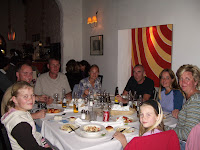 Happy New Year everyone! We welcomed in the New Year in La Paz with Annette & Leo (the Dutch couple we met back at the Deaf Ranch on our 3rd night in Baja). We arranged to meet them in town on the evening along with Leo's family who were visiting them. It wasn't a busy night in downtown La Paz - we wondered where everyone was! but we found a nice Italian resturant and then walked down to the Malecon for the new year countdown - there was loud music and a countdown cloc 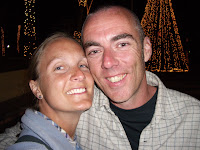 k in one the bars nearby!

La Paz seems like a great little city. Fairly compact so it's good to wander around. There's also a 5km waterfront boulevard (Malecon) which is good for people watching and walking along for some much needed exercise! Plenty of local beaches to ride out to, and a great Starbucks imitation place called '5th Aveneue' which do a wicked Snickers frappe drink (and free Wifi!)!!
No comments:
Newer Posts Older Posts Home
Subscribe to: Posts (Atom)
Charting the travels of Helen, Chris and Harvey the RV around North America between 2005 and 2008.