Have had an awesome time in Whistler - sad to be leaving tomorrow. Our first couple of days on the slopes were OK - we had glorious weather - blue skies and all, but in consequence the snow was pretty slushy and patchy on the lower slopes. Paul and Tom got to grips with snowboarding and on the 2nd day we had them coming down some of the slopes with us!

The weather turned on our third day - which we'd decided to have as our 'day off'. It rained a bit, but we were pretty lucky. We'd booked a Zipline tour on Cougar Mountain - it involved 3 ziplines, varying in length from 400-900 feet across a valley and river. It was really cool and since we were the only 4 people on the tour we got to do all the ziplines twice! Had a blast!

Later in the day we also had booked a 3 hour twilight Ski-doo trip. It left pretty much from the base of Blackcomb mountain (2200 ft) and we rode/drove(?) all the way to Crystal Hut at just over 6000 feet where we had soup and hot chocolate to warm up before heading back down the mountain - again another really cool activity. Paul and Chris were in their element driving big boys toys through the snow and disobeyed all instructions of 'no over-taking'. We even got to do some 'jumps' on the way back in. 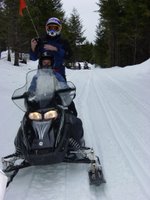 Have just had another 2 days on the slopes now and we've had some wicked snow. It rained all last night and this afternoon snow even settled in the village! The powder conditions up high were just great and we've thoroughly enjoyed our time here - I just can't believe Chris and I hadn't made it up here before now.