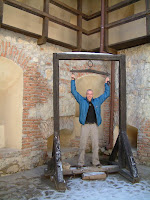 From Bucharest we took a 3 hour train journey to Brasov - on the edge of the Transylvanian mountains. We are staying in a dorm in a hostel in town (the dorm of 7 people in itself being an interesting 'first' for us! - and possible last - I'm too old for it! - I have nothing to prove anymore!) However the hostel is good and 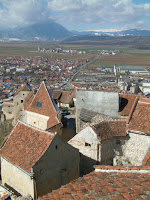 organises cheap tours to the sights of the area. We have just returned from a wonderful day trip around the Transylvanian castles. First stop this morning was Rasnov - a small 13th century citadel on top a hill. After a 10 minute hard walk to the top there are tiny little allies leading up from the central square with some great views out over the town. I tried leaving Chris there, locked in the shackles but alas...! 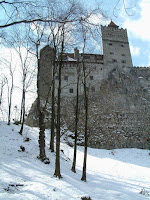 Next stop was Bran Castle . It's famously called 'Dracula's Castle', but in reality Vlad Tepes only ever 'popped in for a cuppa' sometime in the 15th century. The castle is set up on a rocky outcrop and is quite harsh looking but inside it's surprisly small and currently has lots of displays of photos, not giving much of an impression of what it was actually like 'back in the day'.
The higlight was Peles Castle for sure. (Though not the footballer's, though these days most of them I'm sure would be trying to buy up this k 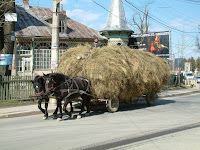 inda joint as a summer home!) Actually it was the summer residence of the 1st King of Romania, King Carol 1 from Germany. Completed in 1914 it's pretty amazing. It had a 15 year long refit between 1975-1990 and is open for tours covering just 30% of what's there. It's simply stunning. Huge grand reception halls, dining halls fashioned in Florentine, French & Moorish styles. More carved walnut and gilding than you could shake a stick at and a particularly lovely spiral stair case 'just for ornament's sake' in the entrance hall. It was pretty advanced for it's time. It had a central vacuuming system, central heating, elevators, electricty, a huge stained glass window skylight covering the whole entrance hall (several metres wide) that can be opened electronically in summer - and all this stuff still functions! It was so cool! And our tour guide spoke English with an accent just like a female version of Count Dracula from Sesame Street!!! - Very sing-song-y!! 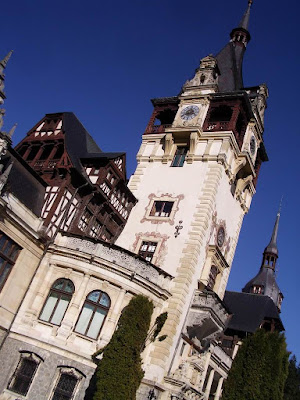 Anonymous said...
This comment has been removed by a blog administrator.
11:02 AM